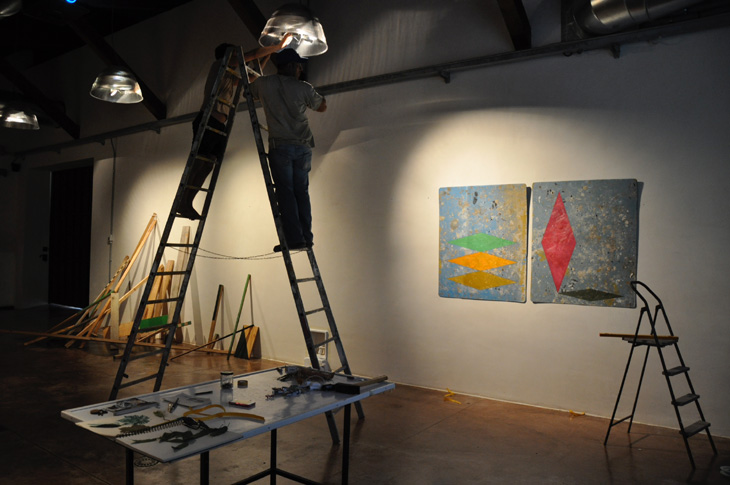 In the first book of the treatise titled “Physics” Aristotele deals with the Becoming. The Becoming as a sensitive process of mutation in which there is still the substrate, that is the raw material, which becomes future substantial memory of the metamorphosis.

The work of Paolo Gonzato seems to be rooted in this concept, it is a continuous search of the primeval element, that he modifies, to make an intrinsic and atavistic order resurface. Gonzato is looking for the peculiar characteristic of the material, the most obvious, that he strips and redefines to return it to a new contemporaneity. He does small corrections or great revolutions, continuous researches to attempt to give order to the natural chaos. The distortion rediscover the essence of woods, fabrics, poor materials and design. An eternal process that contrasts and redefines a will of a planned process. For Mandranova In Residence Gonzato stages a contradictory theater. Plastic sheets, used for packaging, are the ennobled support of large oil paintings where the figure of the rhombus towers over, a modular polygon and simple symbol of the endless possibility of re-creation. The rhombus becomes white as an archetype of the architecture brutally finished that often characterize the surrounding area and chromatic diary of colour fields taken from the native vegetation. The proliferation of colour is the memory of the agave, of the palm, of the almond trees that relies on the wooden polygons and on the beams piled up. He creates a precarious and harmonious structure with tables of various sizes and colours, a controlled implosion that evokes the spontaneous and chaotically perfect design of the sophisticated twine of leaves and vegetable species. Nature gets free to return compressed and arranged in patterns of leaves and plants realized with small lines of ballpoint pen. Looking for a perennial and unreachable configuration of the material, Gonzato says: “I am convinced that all the organized forms go towards disorder, towards the destruction of their systems.”