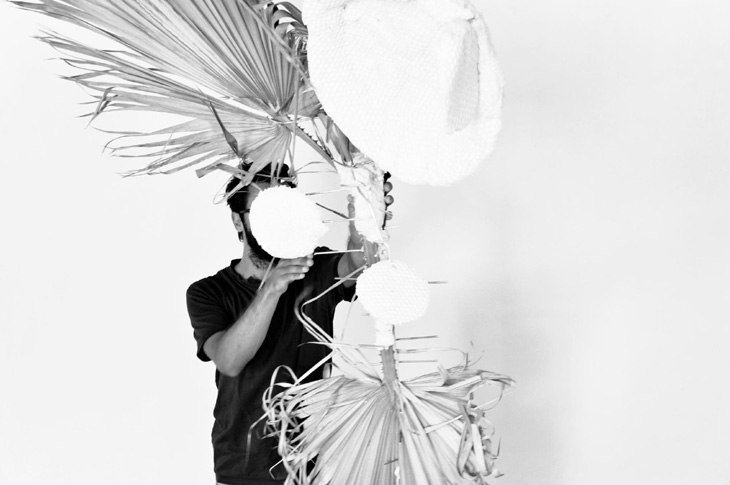 There is nothing absolute, determined, in the work of Luca Trevisani (Verona, 1979, he lives and work in Berlin and Milan) everything plays on an unstable equilibrium, on the search of the crystallization of an idea. Once the thought seems to be defined everything changes, implodes and sets up a new thing. A continuous stream, a shift of energies that structures the matter in a wide range of forms.

As a mercurial process, Trevisani takes an item to transform it into another thing and it becomes an evocation of a thought or a suggestion of a shape. The discovery of the phenomenon of translation, as suggested by the Jung’s philosophy, who found in his analytical psychology many similarities with alchemy, it seems to be the projection of unconscious psychic contents. Nature is the point of departure, the ephemeral and malleable pretext to create inner worlds in constant metamorphosis. The physiognomy of plants is altered in substance but not in appearance, identifiable thanks to real elements that make his intimate journey terrestrial and vivid. There isn’t an interest in the matter, but in the expedient instead. Leaves of prickly pear, realized by shapes​ of expanded polyurethane, pile up on a slender support which seems to hardly support them. The whiteness of a blanket of paint redefines the character of them, deceiving the eye and hiding the device. Hanging objects swing lightly to carry on the kinetic idea of a construction process. A video shows transfigured images, caledoiscopic black spots break the light, digital concretions or representations under the microscope that perpetually rotate. It seems to be bubbling lava, a fluid continually changing. Trevisani dedicates to Sicily this exhibition entitled Dinghedidinghe, a pun that reminds of a local idiom, that it is actually the result of repeating the German word that means thing. Nothing defined, nothing immediately recognizable, things, cultural concepts suggested by them. It is a visual rebus with a dubious resolution, complex in its meanings, minimal in the final solution.